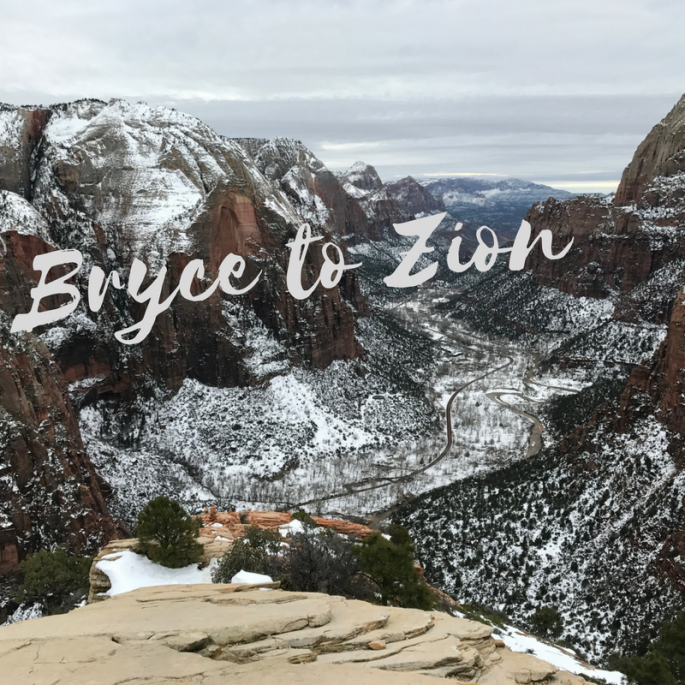 We woke up to negative degree temps in the morning so none of us were all that interested in getting outside for sunrise!  We did however attempt to make coffee outside on Chelsea’s campstove… not the best idea… apparently propane does not work well under these cold temps. The propane was sputtering out which lead to huge flames. We decided to pack that up, get hotel lobby coffee ( not bad if you take a bite of peanut butter granola bread first) and head to Bryce and the visitor center to learn of any trail closures. 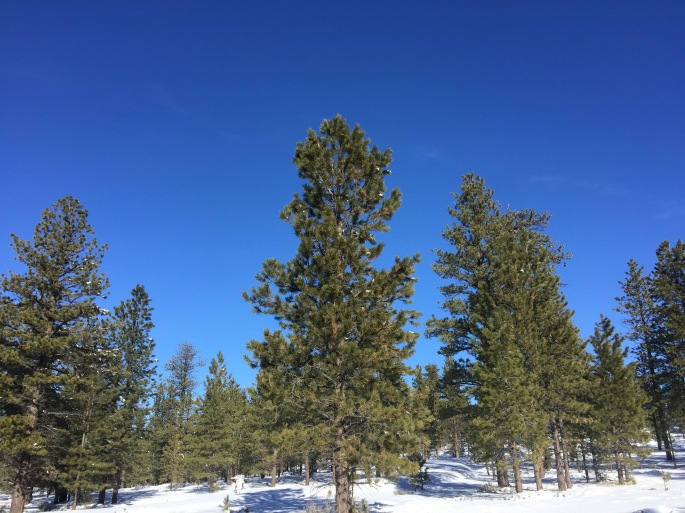 If you have snowshoes this would be a good place to bring em out, alternatively you can rent them out in town at the hotel/restaurant/store.  Side note : Bryce has the best looking park rangers I have ever seen… not sure why they all ended up in Bryce but it was a nice surprise.

Again we started at Sunrise, walked down to Queen’s Garden then to Navajo Trail, side stepped to Wall Street, then on to Peekaboo Loop, Bryce Point and back up to Sunset then across the rim to sunrise.  There were a lot of people around the rim but once you started hiking the trails were pretty desolate.  We ended up hiking for about 6/6.5 miles 4/4.5 hours. Again, layers are a great idea. We got really warm while hiking but once we got into the shadow of a hoodoo it would get chilly. 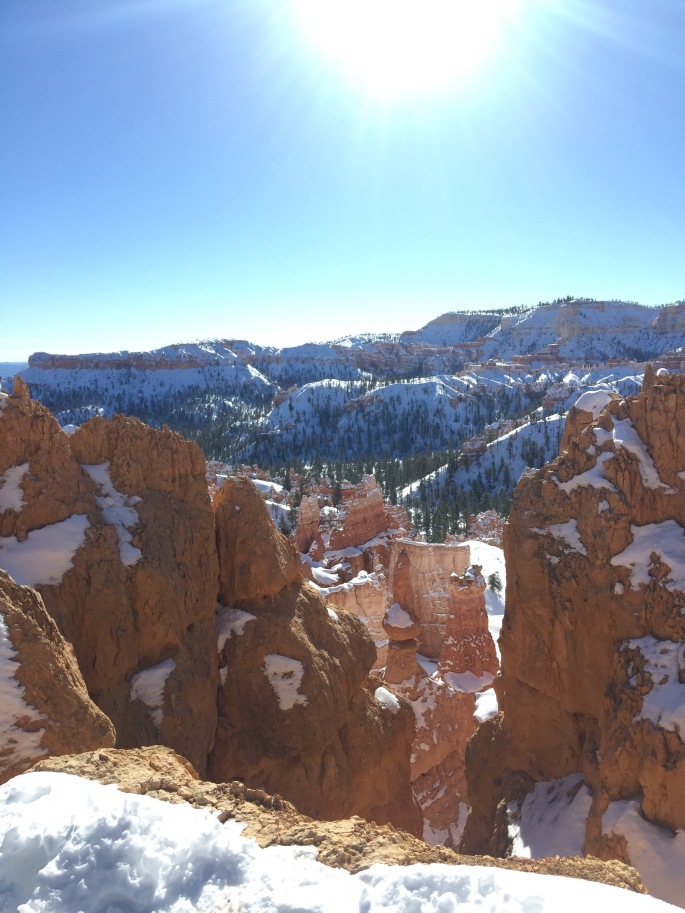 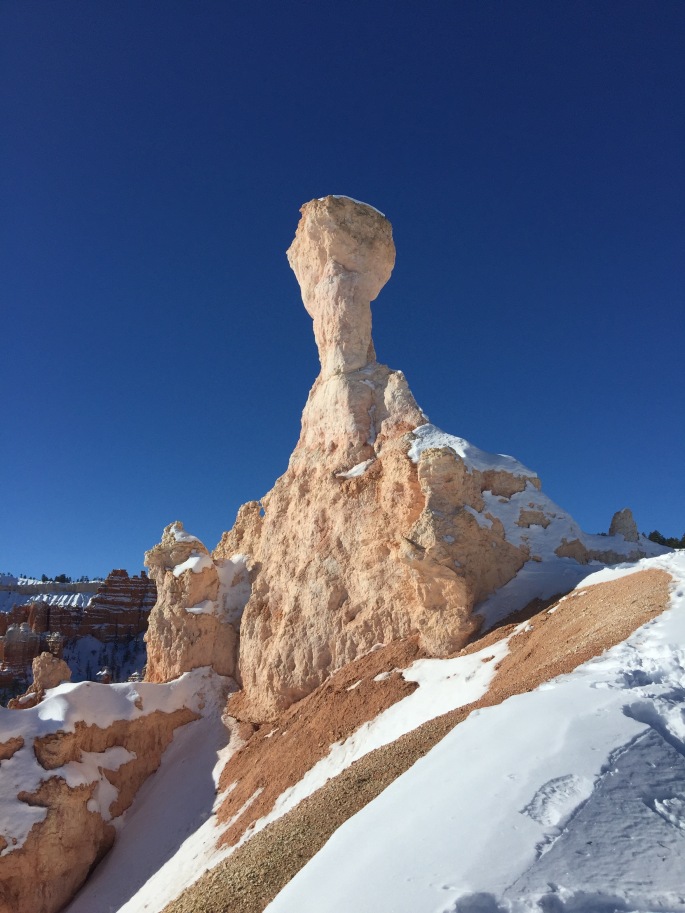 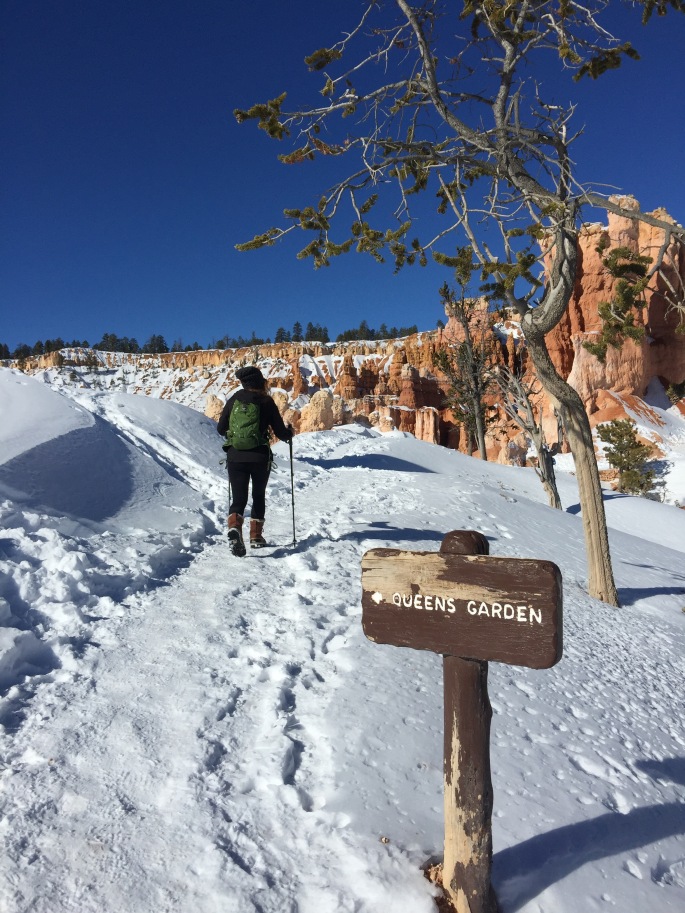 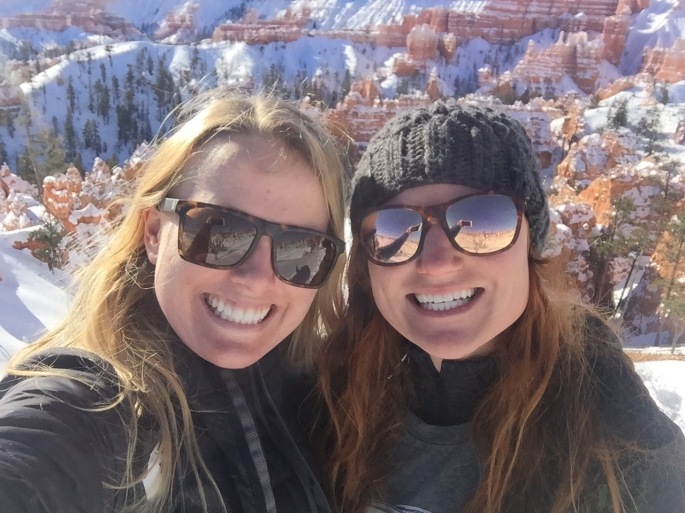 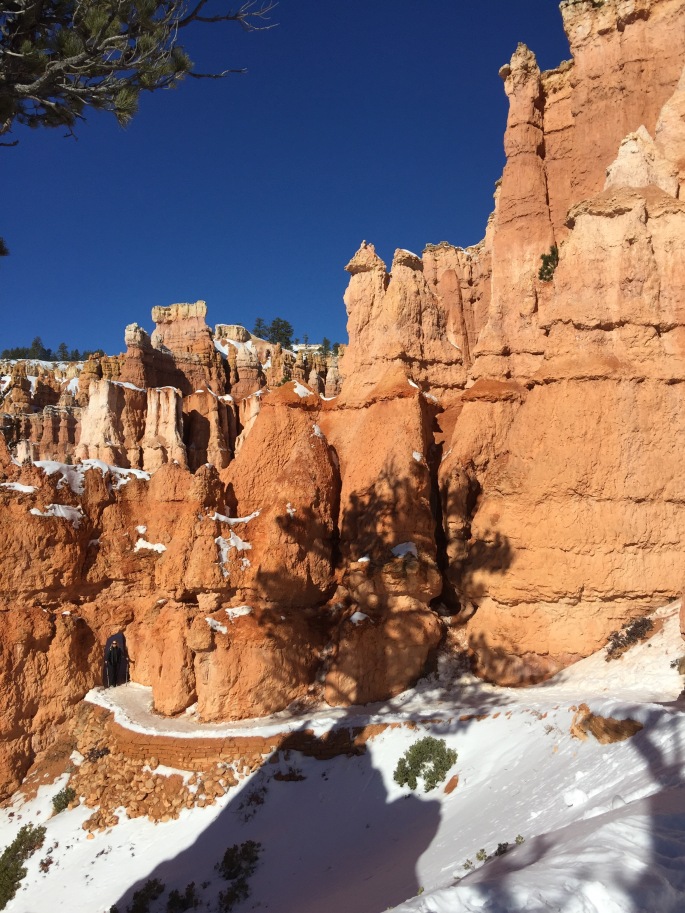 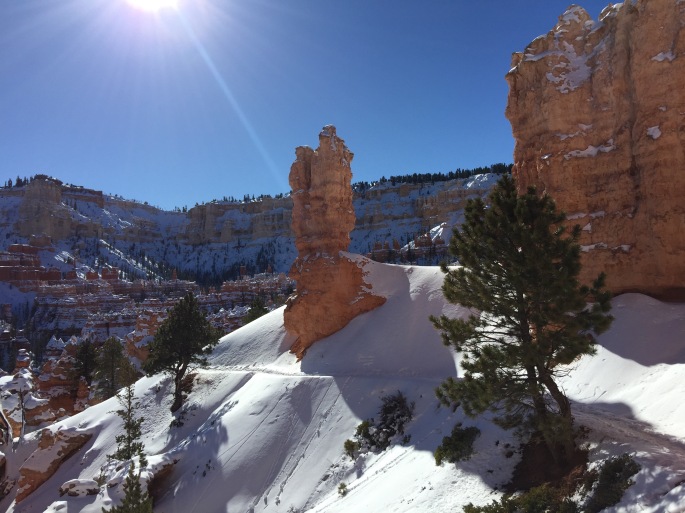 Another day of crampons and hiking poles! Highly reccomend. 100% needed these for the way up sunset! People were slipping and falling left and right. 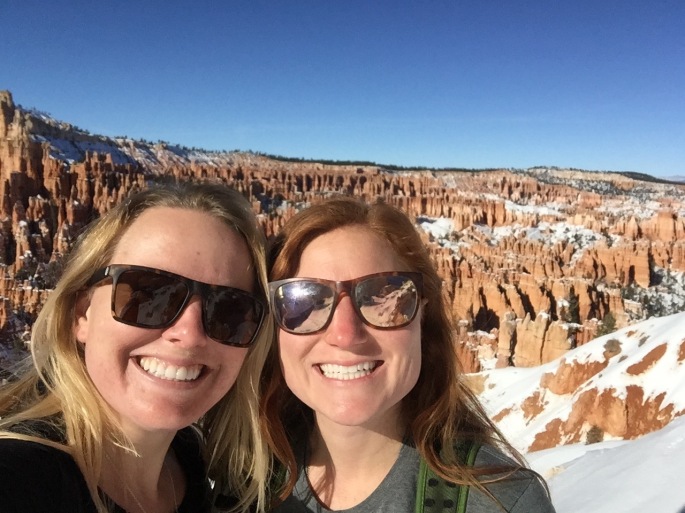 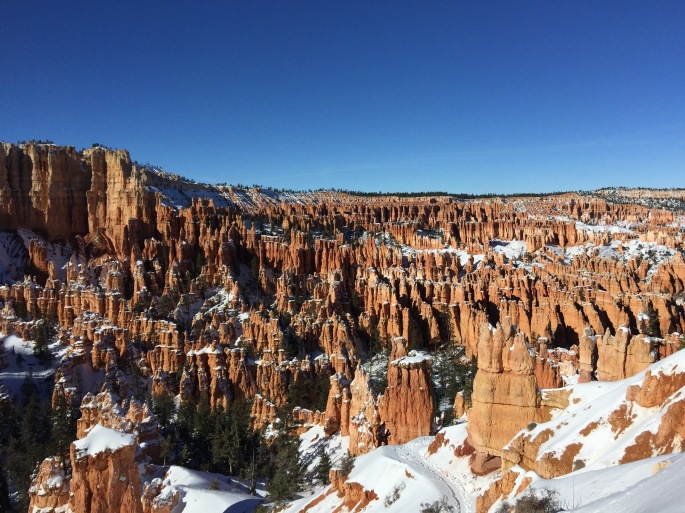 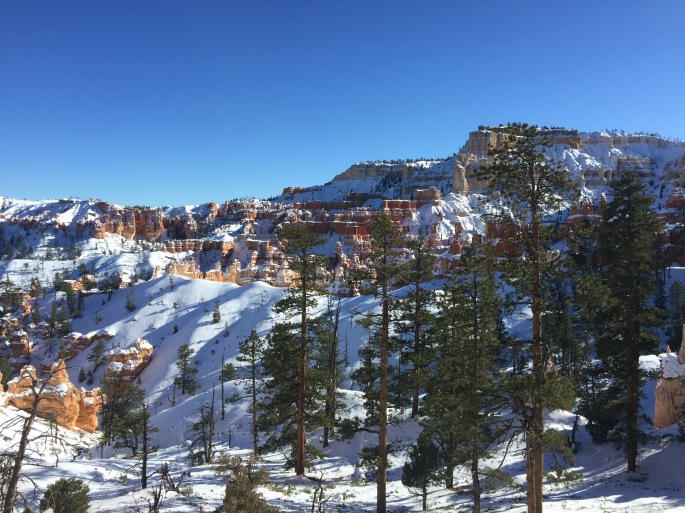 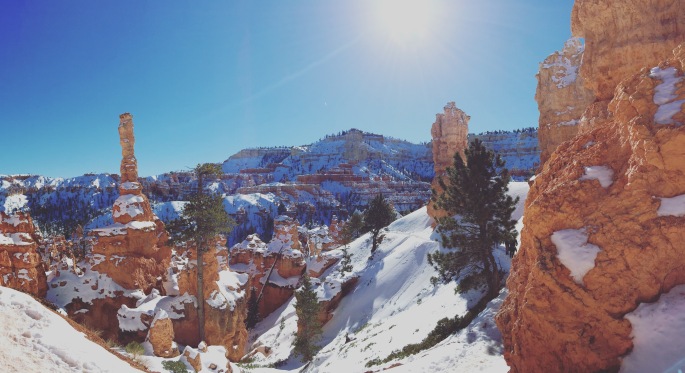 Bryce is 100% one of the most amazing places I have ever been. It is beautiful beyond comprehension. Just looking back through these photos I am shocked that I experienced something so amazing… these aren’t photoshopped. They were taken by me on an iphone it is pretty remarkable.

Once we were done with our hike we decided to head towards Zion so we could start the next morning in Zion. On the way we made guacamole in the car… not the most driver friendly snack! 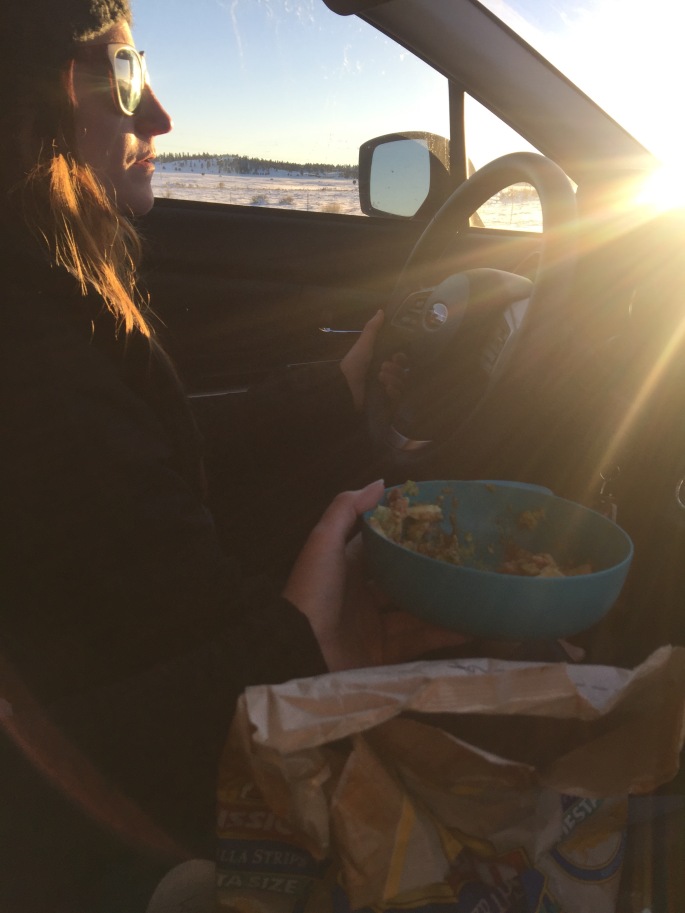 No campsites at Watchman Campground in Zion! Every other campground we had been to was empty.. but Zion was fairly warm, somewhere in the 40s, so everyone was out in droves. If coming around new years I would highly reccomend booking ahead or being able to wing it like us!

I won’t get into details… but we ended up having to finish cooking our dinner in a parking lot. Some of the best food I have ever eaten! Once we finished dinner we decided to head into Springdale and try to figure out where to stay. 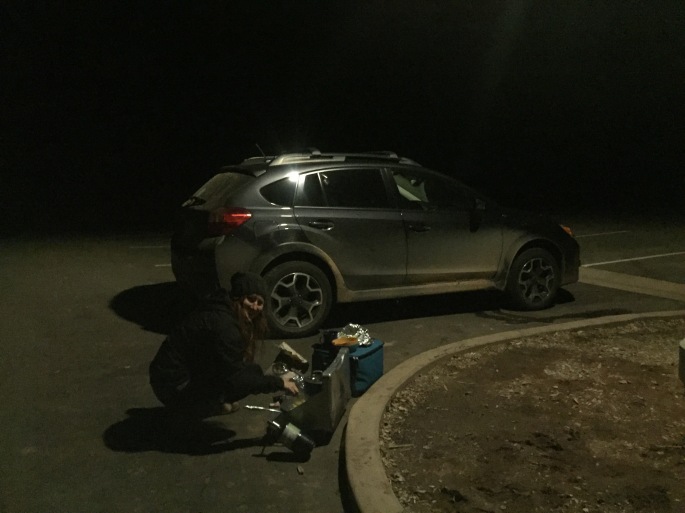 Much to our surprise, right outside the park we encountered a shining sign with the words ‘Brew Pub’ – we looked at each other and Chelsea pulled in the parking lot. Our server was really nice and gave us tons of helpful advice. Such as trails we should go on, where to rent our Narrows gear etc. All the beer on tap is less than 4% per Utah law, but for 4% it ain’t half bad! 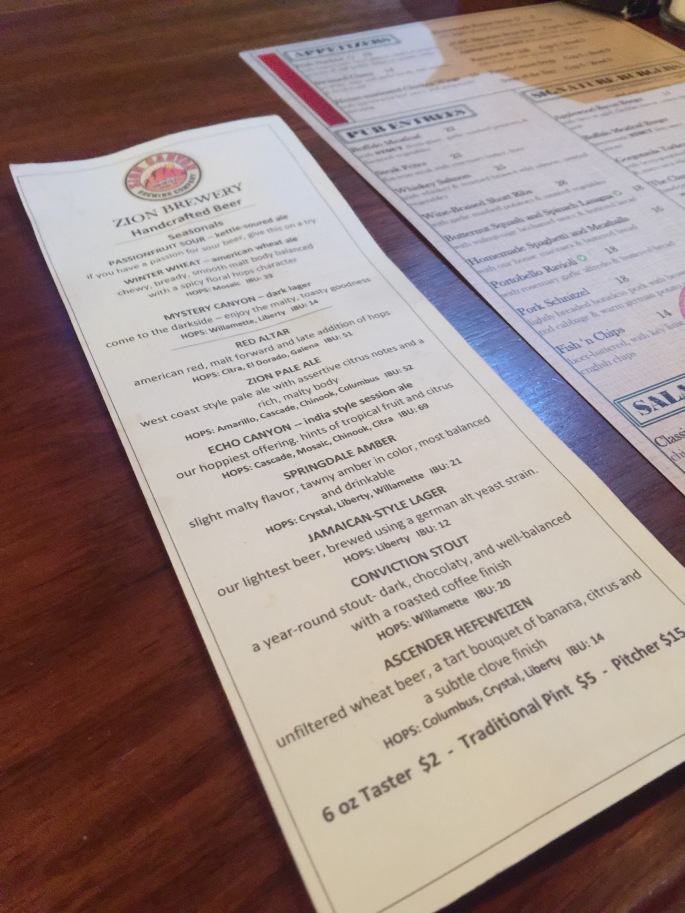 Our server also told us we could head to the Bit & Spur if we wanted some higher alcohol beers… so off we went and were pleasantly surprised by the local beers we sampled. Sunrise in the Canyon! One of the most special sunrises I have ever experienced. Very few people out on the rim and for good reason… it was an icy tundra out there. Our phones kept turning off because they were so cold, we kept trying to warm them up so we could take some photos! 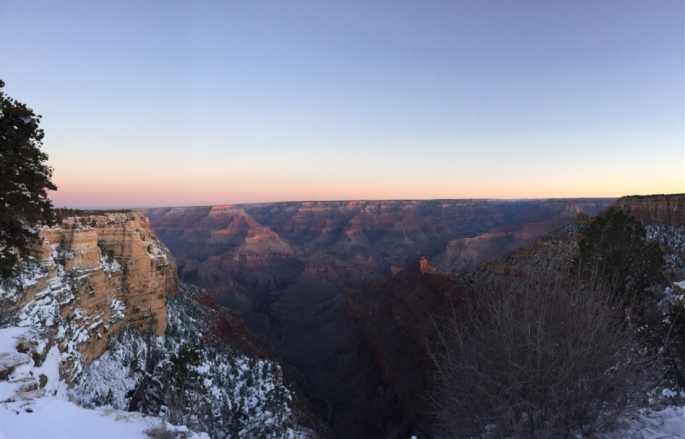 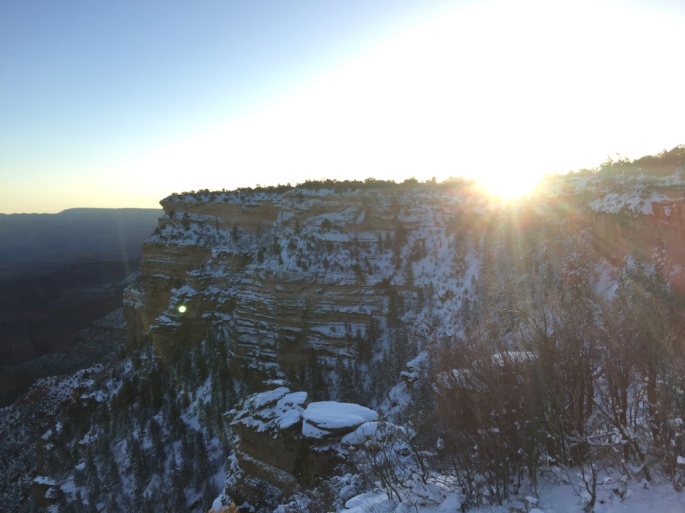 Don’t mind my sweatpants… we literally jumped out of our sleeping bags, packed up the car and bounced.

Photo Cred to the random foreigner smoking a cigarette. Thanks.

It is so hard to capture in a picture the shadows and shifts in light and color. It is such a unique and beautiful experience. 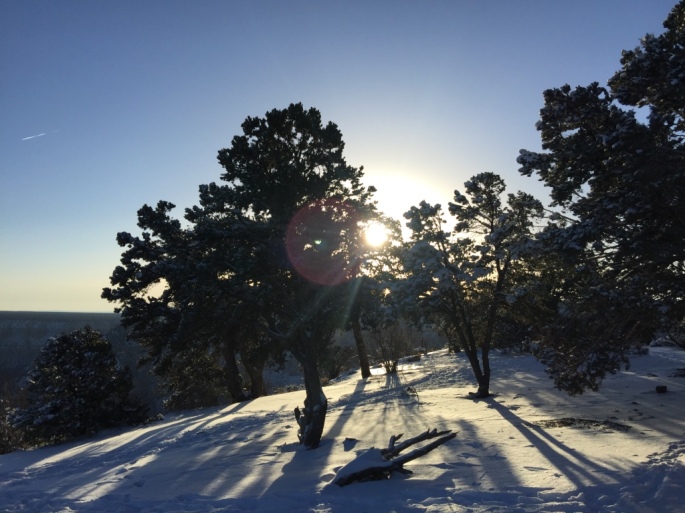 Naturalist John Muir described Grand Canyon: ” In the supreme flaming glory of sunset (Can I impose… sunrise?!) the whole canyon is transfigured as if the life and light of centuries of sunshine stored up in the rocks was now being poured forth as from one glorious fountain, flooding both earth and sky.”

I look very bundled and it was cold but probably not that cold!

Once you leave the Park at Desert View you enter into Navajo Land. You will see many road side stands and also paths for lookouts and paths. Get off the road and explore – another adventure awaits!

Stopped in Cameron. Basically, a couple buildings one of which was a massive gift shop with a fine dinning restaurant in the back… since that looked like the only place to get coffee we asked if we could sit at a table and write our post cards. They obliged and we spent a lovely time in their beautiful dinning room. Great view of the surrounding landscape.

We set our GPS for Antelope Canyon to check out and see what all the hype is about. From our online research it appeared that you had to pay a fee to take a tour to the slot canyons at Antelope both Upper and Lower.

We are not tour people so we knew we weren’t really interested in that but we were hopeful that we might be able to pay to go onto the Navajo land but make our own tour!

If you are a professional photographer OR fancy yourself one maybe it would be worth it for you to go, but for myself it just wasn’t worth it. There are a few different companies but a gentleman working at Kens Tours told us about ‘Waterholes Canyon’. Two miles south of Horseshoe Bend – if you have gone over the bridge you have gone too far. There is a fence with opening and it is likely you will see other cars parked to the side of the road. 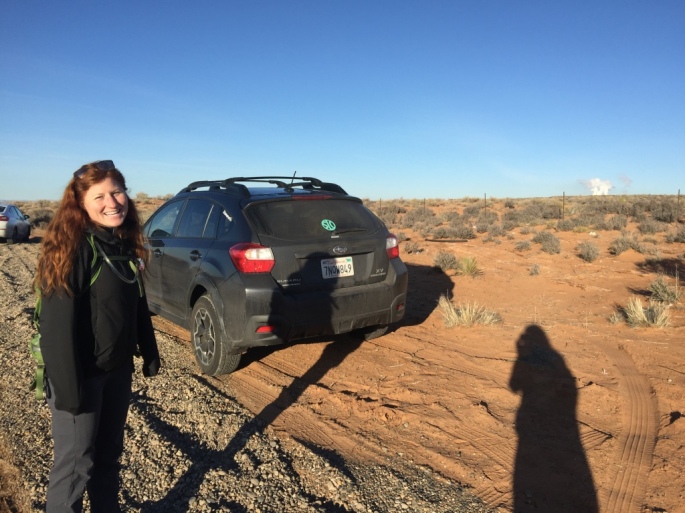 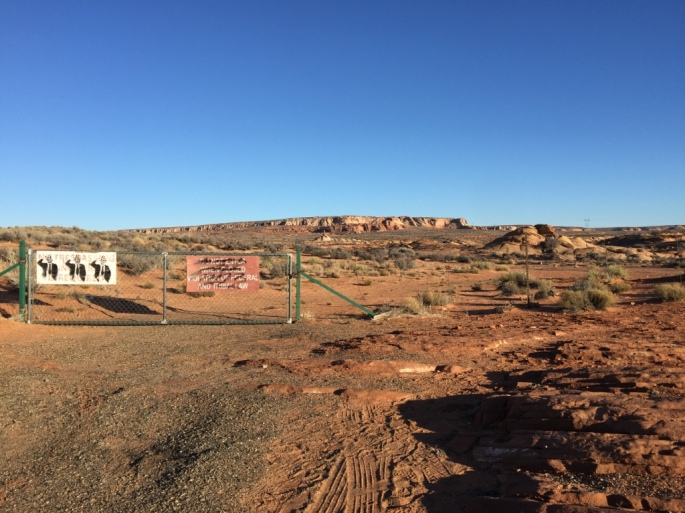 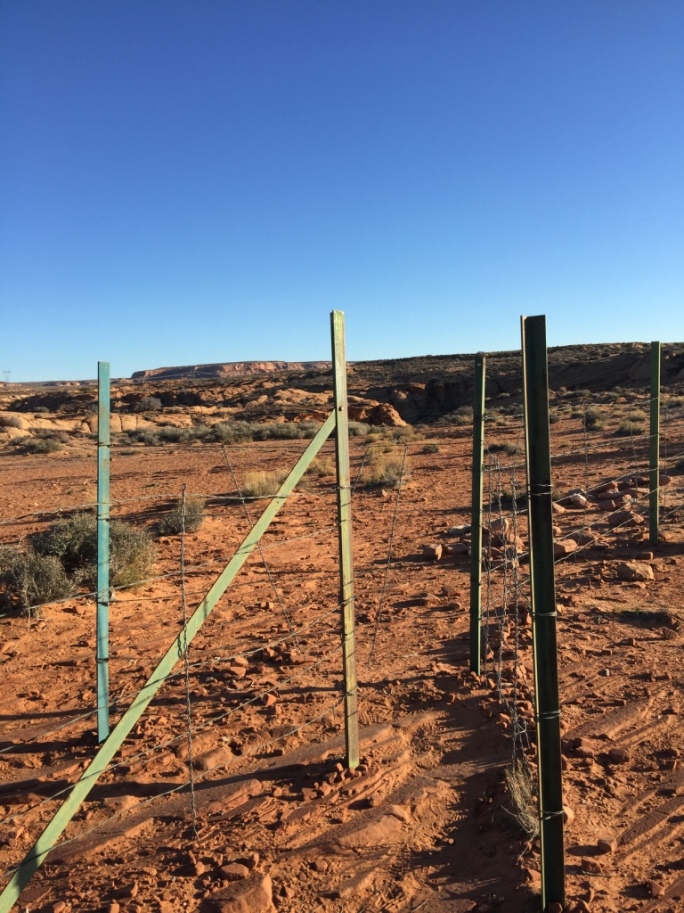 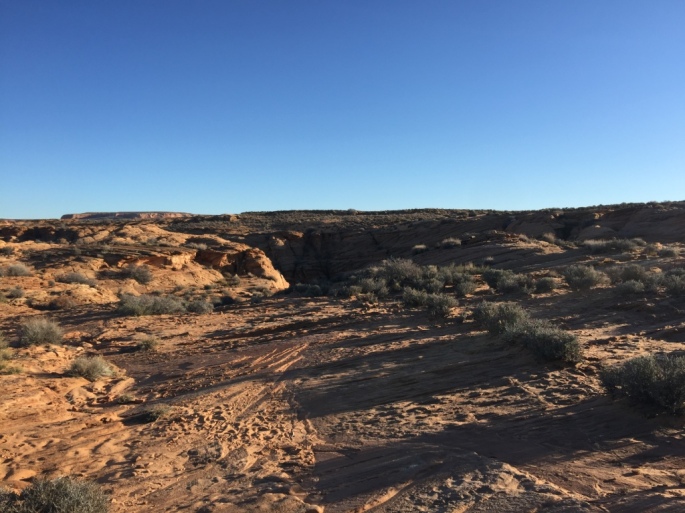 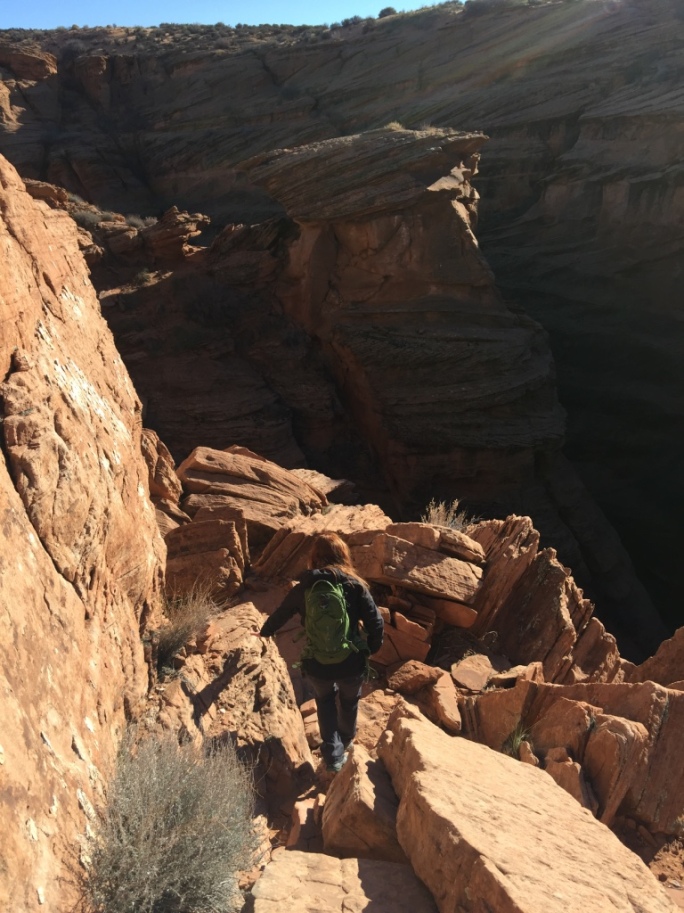 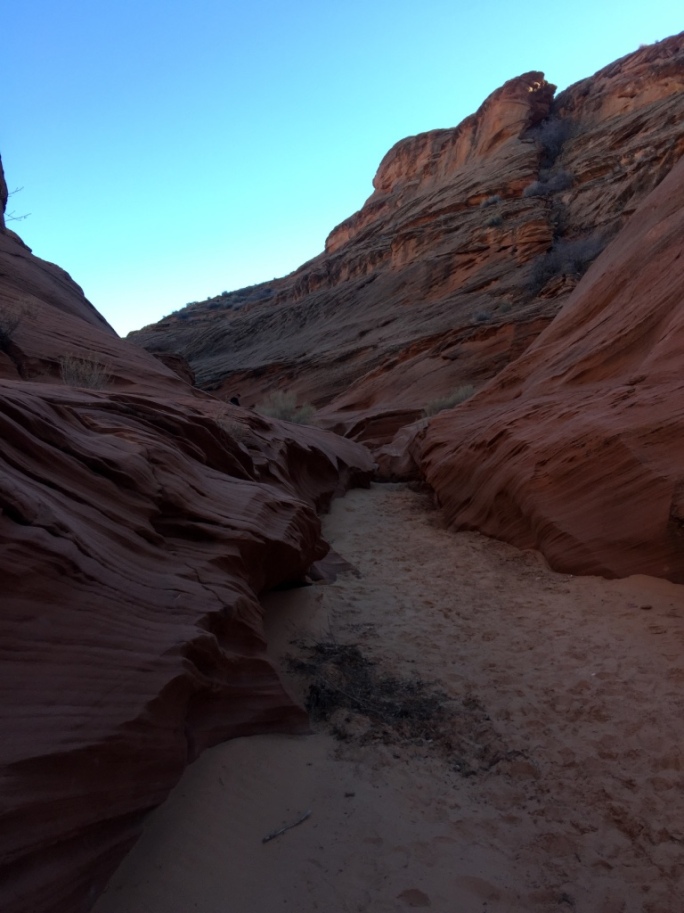 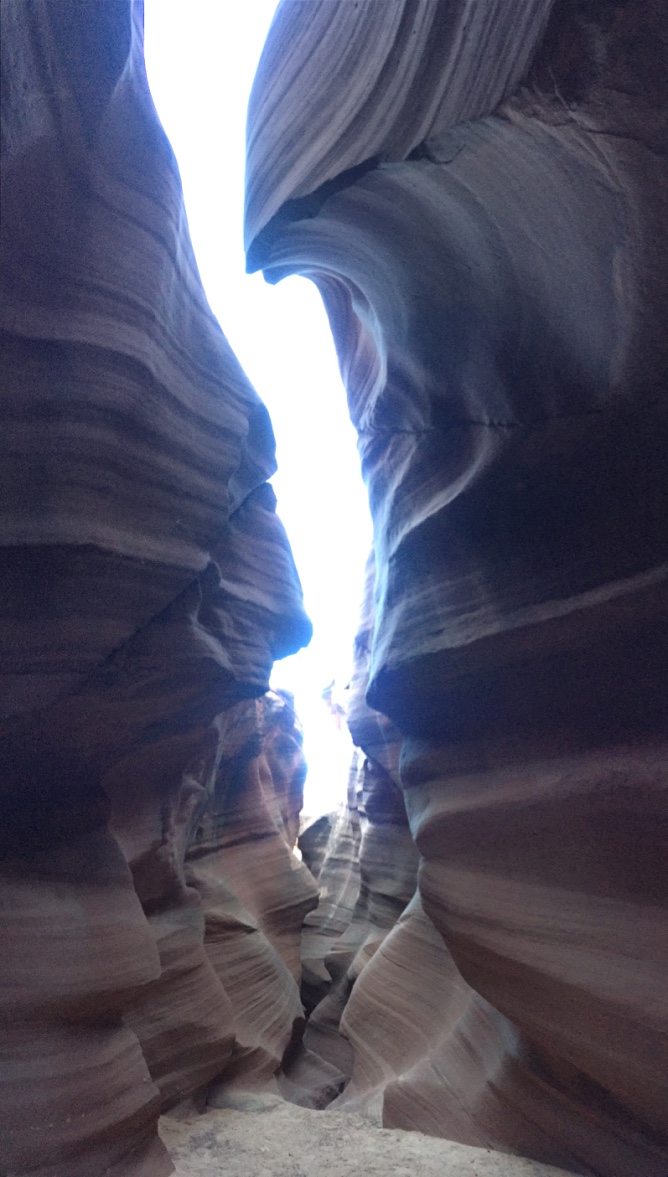 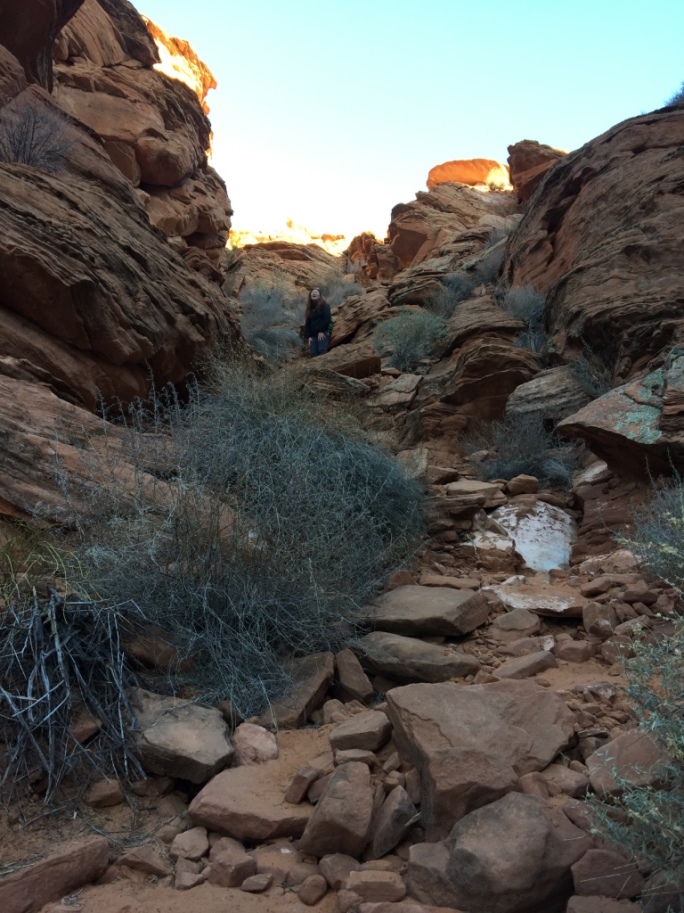 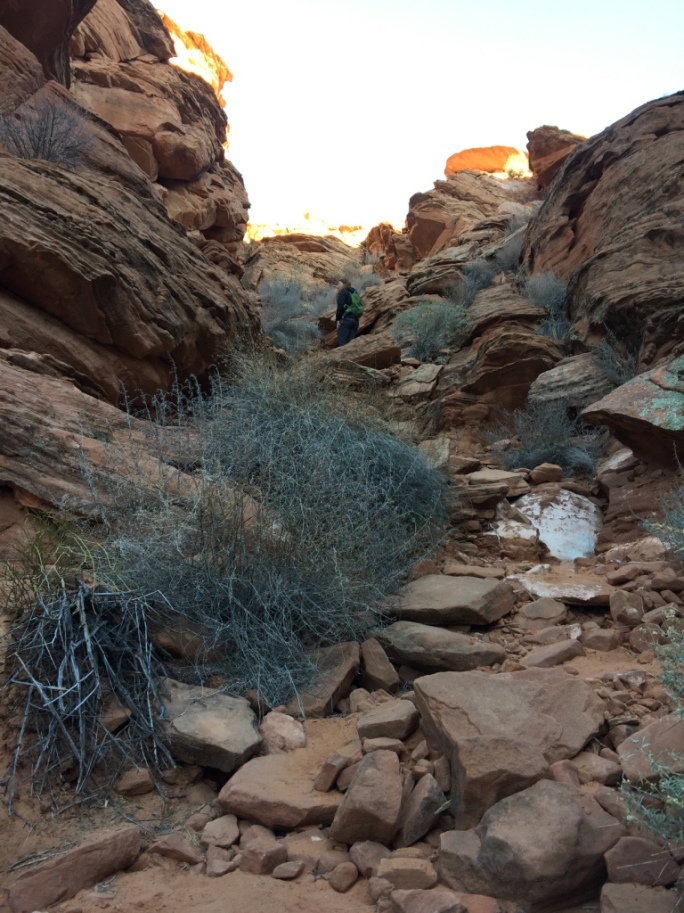 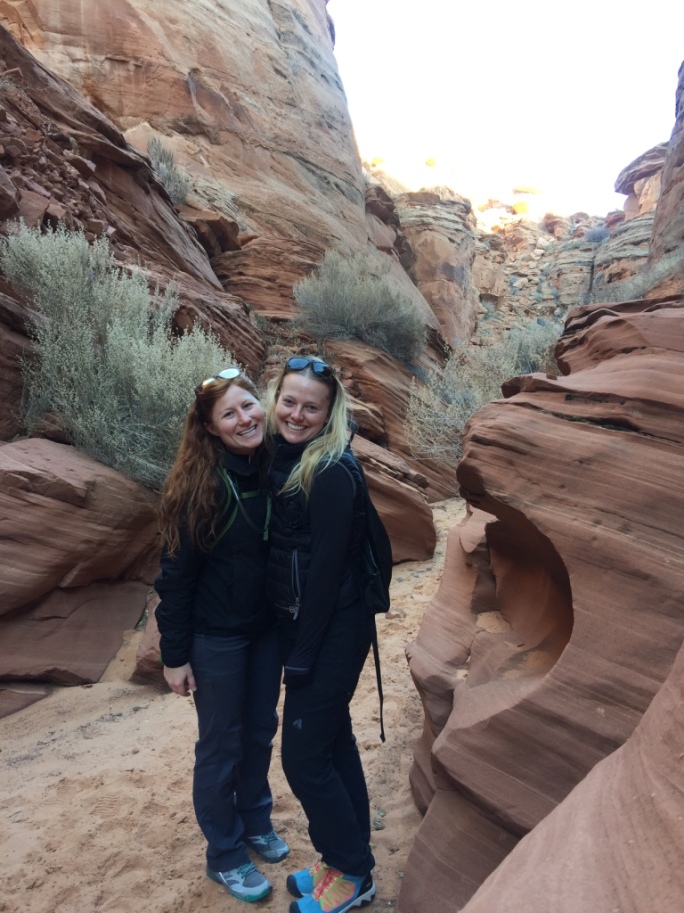 There were maybe 5/6 other people milling about so we were able to see where to head down into the canyon. We spent about an hour walking through the canyon – SO awesome! Very few people around which made for a cool, meditative experience.

About thirty minutes before sunset we headed back over to Horseshoe Bend. Woah! What a difference – a ton of people were surrounding the famed bend. We guesstimated a couple hundred. The sign at the front specifies that no drones are allowed but of course a few people had them out buzzing around.

Despite the buzzing of the drones and women taking glamor shots on the edge it was still a must see and I would go back 100 times over. It is so amazing to see how water has shaped the landscape. I think if you tried to hit it at sunrise you would luck out with less people, just because people like sleeping in!

After sunset, we drove about 45 mins closer towards the Grand Staircase Escalante National Monument to a campground called White House Trailhead and Campground in Kanab, UT. We got there at dark, turned off the highway and drove two miles on a dirt road. Five dollars a night per spot – what a deal!  We set up camp in the dark, with only the stars and headlamps as our guide. We decided to tent camp tonight because it was pretty nice out ( 39 degrees). Chelsea built an amazing fire and we enjoyed some time together looking at the stars and drinking a beer.

We planned to get up early in the morning to drive the rest of the way, another 45 minutes, to the Grand Staircase Escalante National Monument to see about getting a wave permit for the following day.

Despite the cold temps overnight we were warm and toasty! Well rested for a day of adventures.

I love a good adventure so when two of my friends asked if I was interested in a road trip to Zion/Bryce for New Years I gave a whole hearted yes.  This is our second year doing a road/camping trip for NYE. Last year we went to Joshua Tree and it was amazing but this year we decided to do something a little more exploratory!

Check out our map below and feel free to add and use as you please!

We began our trip on Christmas Day, December 25  and made it home January 2.

I can’t quite fathom the beauty that we were able to experience but I am excited to share with you what we did so that it might encourage and spur you on to take your own trip. These places are magical in the winter, still fairly crowded, but if you go far enough on a trail you will find that it is much more desolate than the rim or valley.

Here are a few pics to wet your appetite and get you ready for the posts to come. I plan on breaking down each day so you can get an idea of our road trip itinerary and how we made our trip awesome.

A little planning and lot of ‘be here now’ moments made for a trip that has impacted my life and also has encouraged me to live life outside more this year. My mind, body and soul crave the outdoors and I feel so fueled and ready to kick start my 2017.

Check out my Grams on Insta

Today I left my 20s and entered my 30s 🥳I’m SO beyond thankful for my friends, family and Joe for making this day and years of my life so special. Little Jess never knew all that life could/would hold! I feel so thankful for IT. ALL. Excited for this next decade and all the adventures near and far to be had! #birthday #thirty
Happy wedding day 🥰💒🍻 @austinsmith and @may_wright THANK YOU for sharing the vows with us! Love you guys! 🥳🤗
Same old cabinets with new paint 😎 I have been dreaming of painting these cabinets for a couple years but always talked myself out of it! So glad I did them finally! #clarepaint Also peel and stick subway tile is 👌🏼 #rentalkitchenmakeover
Joe said I looked ready for the beach but the front stoop is where you’ll find me! 😛Got some beer from #topatopa delivered today which was a great surprise 🥰🍻 thankful for the sun, beer and good reading material. Started Tools of Titans by Tim Ferriss and feeling all sorts of inspired!

What I’ve been up to…